Lots of things can go wrong if you choose the wrong taxi.

Prague taxis are infamous for overcharging tourists, especially in the more touristic areas of Wenceslas Square, Charles Bridge and Old Town Square. After being scammed by a taxi driver in Prague when travelling from the Main Train Station, I researched Prague taxis to avoid being ripped off again.

My advice is to always call the AAA taxi service or travel from the airport or train station, pre-book a taxi with Prague Airport Transfers sro. Both are reputable companies, highly recommended by travellers to Prague. AAA taxis have the letters ‘AAA’ clearly marked on the side of their cars and their car bonnets/hoods. Do beware, however, as there is another company in Prague also operating cars displaying the letters ‘AAA’, but with different-sized lettering: their ‘AAA’ letters start large and taper to smaller (first A is large, second is medium-sized, third is small) and, to put it politely, this company might charge you more than the official AAA Radio Taxi company. Some taxi cabs do not belong to the official AAA taxi company but craftily park at the FAIR PLACE ranks when no official taxi cars are around.

The first rule is to board only AAA Radio Taxi, ProfiTaxi, and other official marked vehicles. Most of their drivers speak at least a bit of English and are generally honest. Fares are reasonable as they operate a reliable meter. It is also a good idea to check your route before leaving to be aware of the driver clocks up extra kilometres to make a profit.

If possible, don’t hail taxis off the streets, especially in the more touristic areas, as you risk paying an inflated fare. The usual tactic is to quote a ‘maximum’ fare for a given destination, then drive around long enough to ensure that the meter clocks up the quoted maximum. Instead, call for a taxi from the companies indicated above (you can ask any cafe/hotel/restaurant to call one for you).

If you really need to hail a taxi in the more touristic areas, look out for the ‘FAIR PLACE’ taxi sign. This is a system implemented by Prague’s municipal authorities to guarantee fair prices and safety for taxi journeys. The taxis operating under this system can be found in the areas marked with a sign “FAIR PLACE” and a thumbs-up image. As mentioned above, however, you might still come across the odd dishonest driver here.

The official rate for licensed cabs is 40 CZK flag fall plus 28 CZK per kilometre and 6 CZK per minute while waiting. If you know the address of your destination and alighting point, check out the approximate cost. Some unscrupulous taxi drivers manipulate their meters to make them run faster, keeping an eye on the meter for any abnormal behaviour. 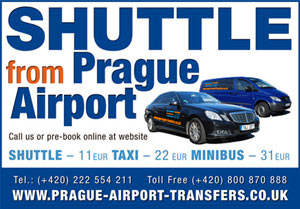 Car rentals is usually much more expensive when you taking car straight from the airport. Also pre-book your car before you go and you will save time, money and hassle. But on the other side if you want really cheap car rental it is worth to take some deal from Czech rentals companies and not choosing international brands like Hertz etc.